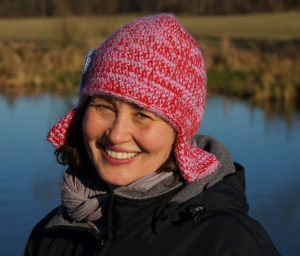 Nina is from Hamburg and has lived in Berlin since 1991. She is a theatre actress, performer, speaker and German teacher.

After finishing her acting education at Theaterlabor Berlin, Nina worked for over 10 years in various German theatres. Her career began with classical text theatre and progressively developed towards theatre sports and improvisation (Action Theatre).

Improvisation is the art of giving form to what is present right now. This requires trained awareness, courage and cooperation. It is also big fun!

Nina has taught German since 2009, both at university and in companies. In 2012, she started to combine language learning with theatre here in K77 Studio and created the course ‘German with Theater Games’, which she runs regulary here and in companies.

The house project K77, where K77 Studio is located, is also her home, which she shares with about 30 other people including adults and children.