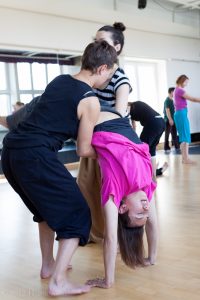 A series of 2-hour laboratories in which we will practice and explore Contact Improvisations in the context of various other dance/movement techniques and somatic practices.

Starting from the elementary principles of CI, we will wander through elements of contemporary dance techniques, Skinner Releasing Technique, Erik Franklin’s method, BMCand martial arts, experiencing the richness and diversity of CI and its impact on other dance/body work approaches. Each laboratory will begin with a short theoretical introduction (max. 30 min), and then go into practice.

work with the floor as a starting point for work with weight, balance and partner + lifts

Skinner Releasing Technique is a movement training method which employs imagery, voice and music as stimuli for improvised movements.

a session devoted to body-mind relations and movement awareness

CI and elements taken from aikido and aiki taiso

I’m a choreographer, dancer, performer, and dance educator, also developing my own work in the field of dance film and dance screening.

I have been practicing CI since 2009 and creating artistic projects based on this method – also with the participation of the blind and deaf people. In the years 2012-2015 a co-organizer of the International Contact Improvisation Festival Warsaw Flow.

I run classes and workshops, among others at K77 Studio, adaStudio, by Sunday Jam Berlin/Sonic Studio and High Definition Dance Studio in Szczecin/Poland.
A graduate of choreography in Cracow, I have also completed the instructor course Improvisation movement and body symbolism at Institut für Tanz und Bewegungsdynamik in Essen (Germany), the Dynamic Body Laban Movement Analysis Training at the Trinity Laban Conservatoire of Music and Dance in London, as well as a training in dance notation (kinetography) at the Choreology Institute in Poznan, and a number of other courses in dance, choreography, acting, and video making. I’m a recipient of the Alternative Dance Academy 2017 at the Art Stations Foundation by Grażyna Kulczyk. In 2018, I was appointed artist-in-residence with the Mind The Dance programme and the IDOCDE Symposium on Contemporary Dance Education/ImPuls Tanz Festival in Vienna.

Since 2015, I live and work in Berlin, collaborating with the Centre for Educational and Cultural Initiatives Schloss Trebnitz, Uferstudios Berlin, ada Studio, K77 Studio e.V.

My performances as a dancer include such venues as Sophiensaele, Kunstquartier Bethanien, K77 Studio, Cankova Galerie, Gemäldegalerie Berlin, K3 – Zentrum für Choreographie Hamburg, as well as solo and duo choreographies presented at the Performing Arts Festival Berlin.
My artistic interests focus on the relations between choreography and visual arts, touching upon such notions as (re)presentation, image, and identity.

Possible participation in the whole block or in selected classes.